When Hustle went to Eye Opticians

So, who hasn’t seen Hustle? (Oh dear there’s always one or two isn’t there.) This iconic BBC TV told the story of a group of hipster con artists striving to outdo each other in hilarious heists, each brasher and more daring than the last. An entire generation was enthralled by the brash yet inept conmeister Danny Blue and captivated by The Fixer, enigmatic genius Ash ‘Three Socks’ Morgan played by Robert Glenister. 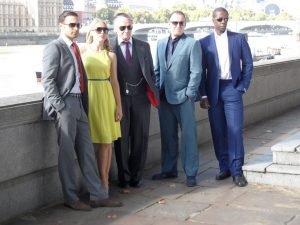 What you probably didn’t know was that The Fixer had some help. From us. You see The Fixer and his friends needed to disguise themselves and still look like hipsters. Who better to pull off that hat trick than Eye Opticians?

What Hustle does for cons, Eye Opticians does for glasses. We were chosen to kit out the cast of Hustle because Shafik and his team have years of experience creating high end eyewear. Shafik is passionate about design and personalisation. He personally fits glasses to make sure they are just right for you. At Eye Opticians you can find brands found nowhere else, along with service that’s consistently high quality. Now that’s no con!